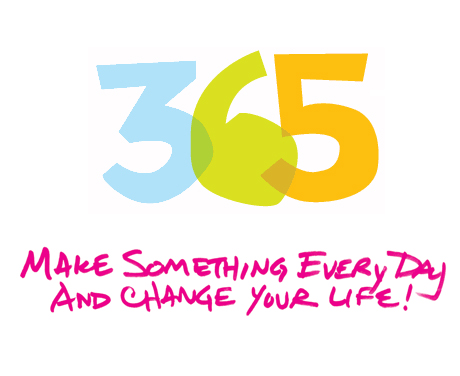 Surface pattern design is all about inspiration. To show where inspiration shows up, it might be a good idea to start a blog. By posting this post, the blog of EM | Surface Design is a fact.

1 the process of being mentally stimulated to do or feel something, esp. to do something creative.

At the end of 2012, the first thoughts of becoming a professional surface (pattern) designer came along. In the back of my head there was the dream of being a creator of patterns and prints for printable surfaces. One of my concerns was, if there would be enough inspiration.

"Flow" a Dutch magazine (nowadays with an international edition too) for creative minds, wrote about someone who started a 365 days project creating patterns, posted in a blog to share it with an audience. Such a project became the key for me to discover if there would be a moment I would run out of inspiration or not.

I decided to start my own project. I bought a copy of Noah Scalin's "a daily creativity journal 365 make something every day and change your life!".

The concept of a daily project is simple but inspired: Choose a theme or medium, then make something  new every day for a year. Noah Scalin's book shows 365 projects prompts designed to kick-start your creativity.

January 2013 the first edition of [365] prints & patterns, was a fact. After only 40 editions I knew that there would be enough inspiration for daily inspiration, not only for a year, but for the rest of my life. Even on days where the prompt wasn't exactly my thing, in the end of the day I came up with something very reasonable.

Searching the net for fellow Surface Designers I found my inspirations source at Pattern Observer by Michelle Fifis. There were plenty e-courses which would make me grow to become a professional in the industry.

Right now, a year later in time, I actually launched my own business "EM | Surface Design".

From this point of I will share items what inspire me and makes want to create new prints and patterns.

See you next time?